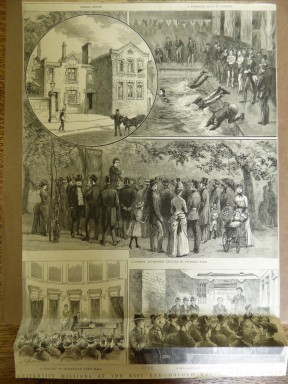 On November 30th 1891, a memorial stone was laid in the finished walls of the entrance to commemorate the rebuilding and expansion of the Oxford House settlement.

Although this was several months before the grand opening by the Duke of Connaught on the 23rd June the following year, the ceremony was one of religious importance. The Bishop of Bedford conducted a procession from St Andrews church, within whose Parish Oxford House once laid. A service was then received by members of the house, and stone was fixed in place during a prayer.

From reports for the house, it is probable that the residents began moving into their rooms in early 1892, with the official inauguration in June, though the various clubs Oxford House catered to were not able to move in as quickly.

The new house was constructed due to space constraints; Head of House at the time, Arthur Winnington-Ingram had noted in the reports of 1890 that;

“Out of seventeen residents, there is only room for three, in addition to the Head, in the House itself. The rest have to be placed here and there, in adjoining or even distant lodgings…”

This new building and what is now the current house, designed by Arthur Blomfield, sits 150 yards from the original site, on what was once a long road called Mape street (now Derbyshire Street), which today is cut off by Weavers Fields.

The house would now hold up to 20 residents and have space enough for “a lecture room, classrooms and Club premises”.